I seriously started collecting Hong Kong coins in 1975 and immediately tried to find good reference books. There did not appear to be any available and I had difficulty obtaining information on any books that had been published.

I have since discovered that the first catalogue to be published on Hong Kong Currency was by my friend Antonio B. de Sousa who now lives in Melbourne Australia. It has taken me till August 1997 to get a copy of this catalogue which is shown amongst the items listed below.

The standard references of World Coins and World Paper Money both by Krause Publications are a good starting point for the Currency of Hong Kong.

The Ma and Tan catalogues are now updated and published every year with information on new coins issued and the retail price in several grades.

Each September since 1991 there has been a coin fair and auction in Hong Kong run by Taisei. The auctions were originally run with Spinks and Son. In 1994 Spinks were purchased by Christies who's policy is to run their own auctions. The Taisei auctions since 1994 have been with Baldwin's and Gillio Auctions. Since 1994 Spink's have run their own auction in Hong Kong in November.

I have tried to list the publications below in order of publication with the Auction Catalogues at the end.

The Coins of The British Commonwealth of Nations
Part 2. Asian Territories. by F. Pridmore
Published by Spink & Son Ltd. 1965
Pages 275 to 326 list the coins of Hong Kong
Hard Cover. 337 Pages 180mm x 245mm
This I believe is the first Specialist publication on Hong Kong. 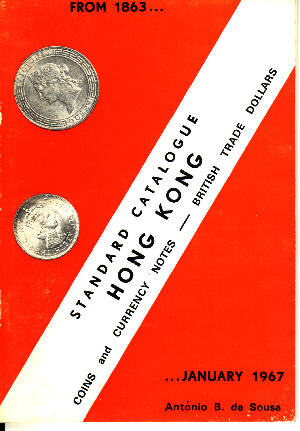 Regal Coinage of Hong Kong, by Ray Hamson
Published by the Hong Kong Museum of History in May 1975.
127mm X 187mm, 48 pages in English and Chinese. Soft Cover.

The Banknote That Never Was. by Francis Braun
First Published 1982. 140mm X 250mm, 138 pages. Hard Cover.
The story of the emergency bank notes printed at the end of WW II that eventually were never issued. 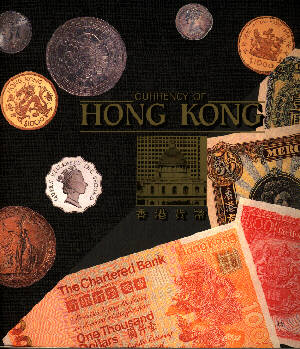 Money in the Bank by Joe Cribb
The Hong Kong Bank Money Collection.
218mm X 285mm. 204 Pages. Published by Spink & Son in 1987 for The Hongkong and Shanghai Banking Corporation. Hardback.